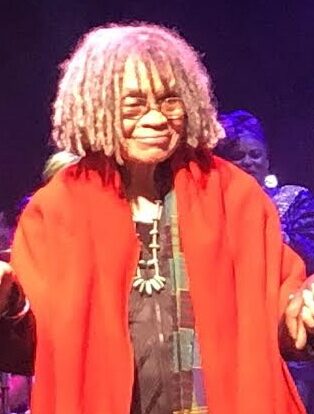 Sonia Sanchez, poet, activist, scholar, educator, cultural ambassador, and one of the kindest humans I have ever met, is set to receive an honorary doctorate degree from Arcadia University, and address the Class of 2022 at their commencement ceremonies. Arcadia University has also organized a Zoom Tribute to Sonia Sanchez, “Resist is a Womanist Word.” Here is the link to the recording: https://youtu.be/xlLzdGT3Ht4. Other recent distinctions for Ms. Sanchez include the Gish Prize, the 2022 Jackson Poetry Prize, and the Edward MacDowell Medal.

And now, I reflect back on an amazing encounter with Sonia Sanchez.
After the opening act exits, an invisible hush bonds the audience in suspense. The production starts. Soon after, the spotlight shifts stage right, to the pecan complexioned woman with the delicate frame seated regally, dressed in a red and black bold patterned dress, vibrant woven plaid scarf, and a gigantic crimson cashmere shawl. Poet Sonia Sanchez adjusts her feathery, dangling silver locks away from her eyes. The prolific artist then proceeds to deliver an eloquent portrayal of Rosa Parks. Her jewel-toned voice absolutely soars over the choir and orchestra in the Overture of “The Movement Revisited ~ A Musical Portrait of Four Icons,” which is a colossal production commandeered by 8-time Grammy-Award winning bassist and composer Christian McBride. 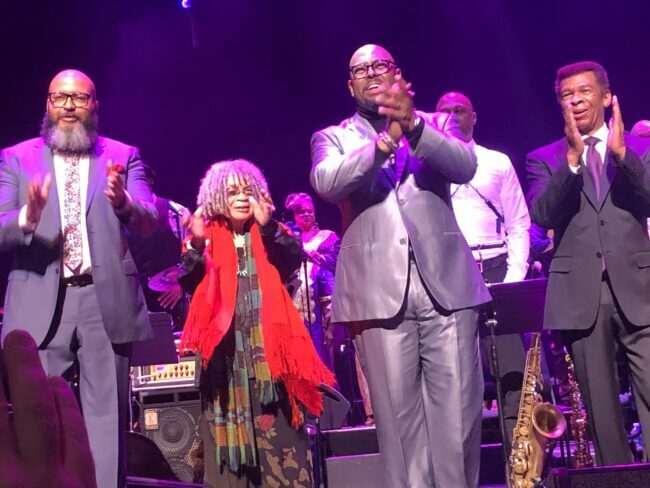 This masterful work illuminates the words of, and pays homage to, Mrs. Parks, the Rev. Dr. Martin Luther King, Jr., Malcolm X, and Muhammad Ali. The work also celebrates the historic 2008 election of The Honorable Barack Obama to the Presidency of the United States. Interwoven throughout the orchestrations, are four orators, (including Professor Sanchez), plus13 original Christian McBride compositions. His libretto is culled from writings, speeches and interviews of the four cultural exemplars. The production itself, which has morphed and developed since its 1998 debut, has an accompanying CD released on the Mack Avenue record label. It is a magnificent array of diverse artists, including a big band orchestra, soloists on various instruments, and the angelic voices of a 25-piece choir led under the direction of choral arranger and lead vocalist J.D. Steele. I was privileged to witness this majestic cultural spectacle live and in person on November 11, 2021, at the New Jersey Performance Arts Center (NJPAC), in Newark, New Jersey.

So there I was, sitting in the theater reading the program as I waited for the production to start and wait, what? Lo and behold! The Last Poets and Newark Mayor Ras Baraka, (the son of Amiri Baraka) are Opening The Show!!!!!! I am overwhelmed with Black pride and joy. Reminds me of that magical time I got to perform with Abiodun from The Last Poets, in 2017.

I have been following The Last Poets since their landmark spoken poetry debut album arrived in 1970. They set off a cultural frenzy like none other with the poetic, percussive, consciousness-raising classic, “On The Subway.” Time has not diminished the verve or the magnetism of The Last Poets. They stoke the flames with their wit and artistry. Then fire ignites when Ras Baraka joins the stage. His spoken words brought the house to its feet! This was a super fantastic, superlative, beyond extraordinary, most excellent performance! There are no words to describe the electricity in the air that night. It’s like I had prepared my entire life for this spontaneous moment to happen. And this was only the opening act! And the momentum kept going when the full production commenced! What an exhilarating theater experience, from start to finish. I was so grateful to witness “The Movement Revisited” live. When I got back home to Philly, I listened to the soundtrack over and over.

“I saw the contributions of each of these so-called disparate icons and understood how it made a complete picture of pride, dignity, and courage,” wrote Christian McBride on the liner notes to his meticulously researched production’s’ accompanying CD.

Here, I share excerpts from Sonia Sanchez’s portrayal of Rosa Parks:
“We Blacks are not as fearful or divided as people think. I cannot let myself be so afraid that I am unable to move around freely and express myself. If I do then I am undoing all the gains we have made in the Civil Rights Movement. Love. I say Love, not fear, must be our guide.

“In these days many people are feeling a different type of fear that is hard to break free of. There are so many new things to be afraid of that were not as common in the early days. We should not let fear overcome us. We must remain strong. Violence and crime seems to be much more prevalent. It is easy to say we’ve come a long ways but we still have a long way to go. Many of our children are going astray, but still, I say still, I remain hopeful.

“I have learned over the years that when one’s mind is made up, this diminishes fear. Knowing what must be done does away with fear.

“I do the very best I can to look upon life with optimism and hope and looking forward to a better day, but I don’t think there is anything such as complete happiness. I think when you say you’re happy, you have everything that you need and everything that you want and nothing more to wish for. I have not reached that stage yet. 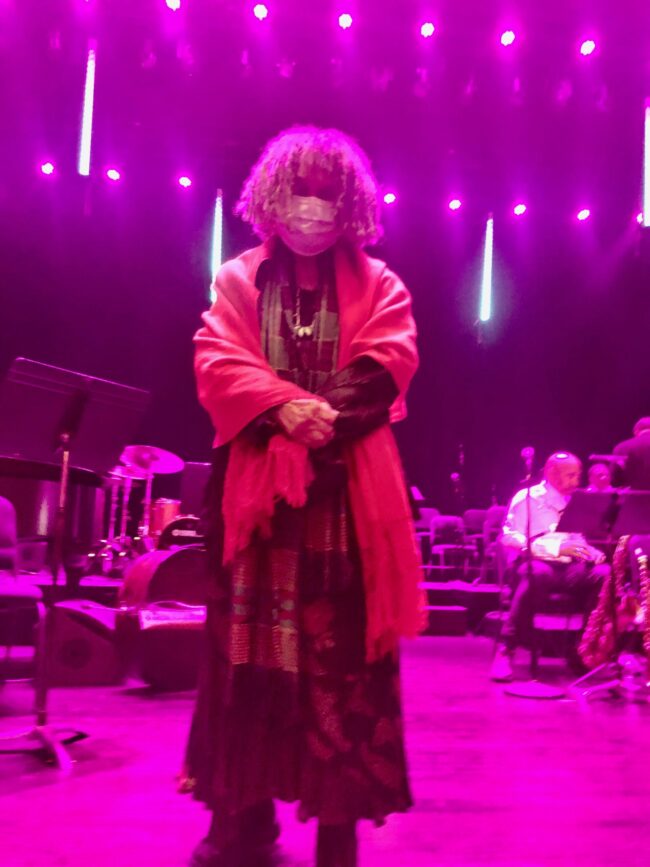 Thank you, Christian McBride, for creating this masterpiece and sharing it with the world. Its messages are as timeless and urgent as ever!