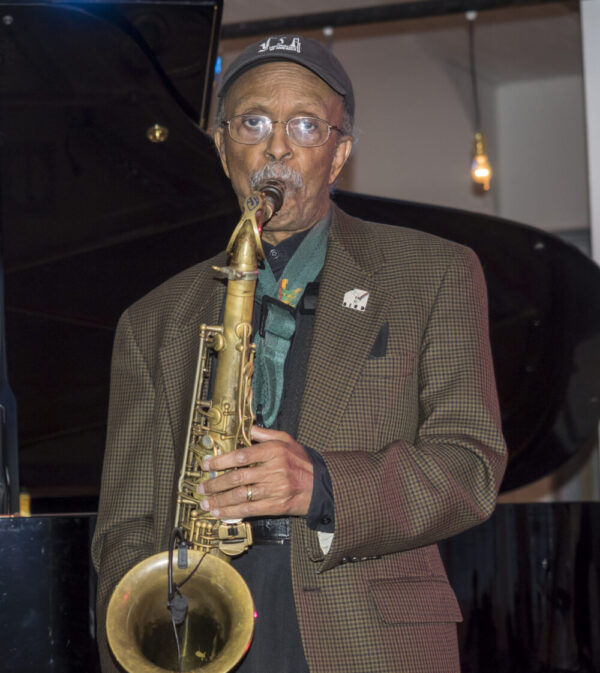 (This is a file photo from April 26, 2014. Saxophonist Jimmy Heath, from The Heath Brothers, performs at the 23rd annual Jazz Loft Party at Hudson Studios in New York City. via Shutterstock.)

Great news! I was awarded a grant to write and produce a spoken word, music and multimedia project in honor of The Heath Brothers, Philadelphia’s internationally renowned musicians: Percy Heath-Bass, James “Jimmy” Heath-Saxophone, and Albert “Tootie” Heath-Drums. The premiere of my new work will coincide with 2022 celebrations for National Poetry Month and Jazz Appreciation Month in April, as well as Juneteenth and Black Music Month celebrations in June.

It’s been said that genius only strikes a family once. But with South Philadelphia’s Heath Brothers, genius struck not once, not twice, but three times. The brothers distinguished themselves as innovative jazz musicians, band leaders, composers, arrangers, and cultural advocates, spanning from the 1940s to the present day. The Heath Brothers grew up at 1927 Federal Street, which became a popular haven for musicians. Can you imagine all the stories held within those walls?

This iconic group of master musicians is comprised of bassist Percy Heath, (renowned as a founding member of MJQ – The Modern Jazz Quartet), saxophonist Jimmy Heath (whose compositions are included in the canon of jazz standards), and drummer Albert “Tootie” Heath (who recorded with John Coltrane) among other notable distinctions. At 86, Albert survives his two older brothers: Percy (1923-2005) and Jimmy (1926-2020). A second generation of Heaths also caught musical fire. Drummer, composer and producer “Mtume” is Jimmy’s son. His 1983 R&B hit “Juicy Fruit” has been sampled on over 100 recordings. Mtume sadly passed away in January 2022 at the age of 76.

All leaders, the siblings form the nexus of “The Heath Brothers” band, established in 1975 with pianist Stanley Cowl. The Heath Brothers impact on jazz is unprecedented within one family. Their combined affiliations include John Coltrane, Dizzy Gillespie, Miles Davis, Max Roach, Milt Jackson, Benny Golson, and countless others.

I am a passionate jazz aficionado, jazz poet and jazz writer fortunate enough to say that Max Roach, the legendary drummer, wrote the foreword to my 2000 book of poetry, “Color in Motion.” I am also fortunate enough to say that during the 1970s and 1980s, I saw Percy Heath perform live with MJQ (The Modern Jazz Quartet). As if their distinct mesmerizing sound weren’t enough, MJQ wore tuxedos! Handsomeness on steroids. I was never so impressed. During the 1980s, and 90s, I witnessed various iterations of The Heath Brothers in live performance. During the 1980s, I interviewed Jimmy Heath and Tootie Heath on several occasions during my tenure as the Arts and Entertainment Editor for “The Philadelphia Tribune.”

For this project, I will write poetry honoring the Heath Brothers, which I will perform with a trio and videotape. I will interview people who knew the Heath Brothers. Their story will be conveyed through music performance, audio, videotape and still photography. This multimedia performance in tribute to the Heath Brothers will premiere on Friday, April 15th, 7:30 pm at the CEC (Community Education Center) in West Philadelphia.

I am so thankful for being selected for this project, which is being made possible by the largesse of generous funders. I am thrilled to be among 46 Black creatives in the greater Philadelphia area awarded $90,000 in grants by the Black Music City Project, thanks to investments from the Wyncote Foundation and the City of Philadelphia Office of Arts, Culture and the Creative Economy. Each recipient is receiving between $1,000 and $3,500 each to produce new artistic works inspired by Philadelphia’s rich Black music history. Excerpts from our creations will be revealed during a special Juneteenth (June 19) event in Philadelphia, which coincides with Black Music Month. WRTI-FM, WXPN-FM & REC Philly are all partners in this effort to preserve the musical legacies of superlative Philadelphians. #blackmusiccity
~. ~. ~. ~. ~.