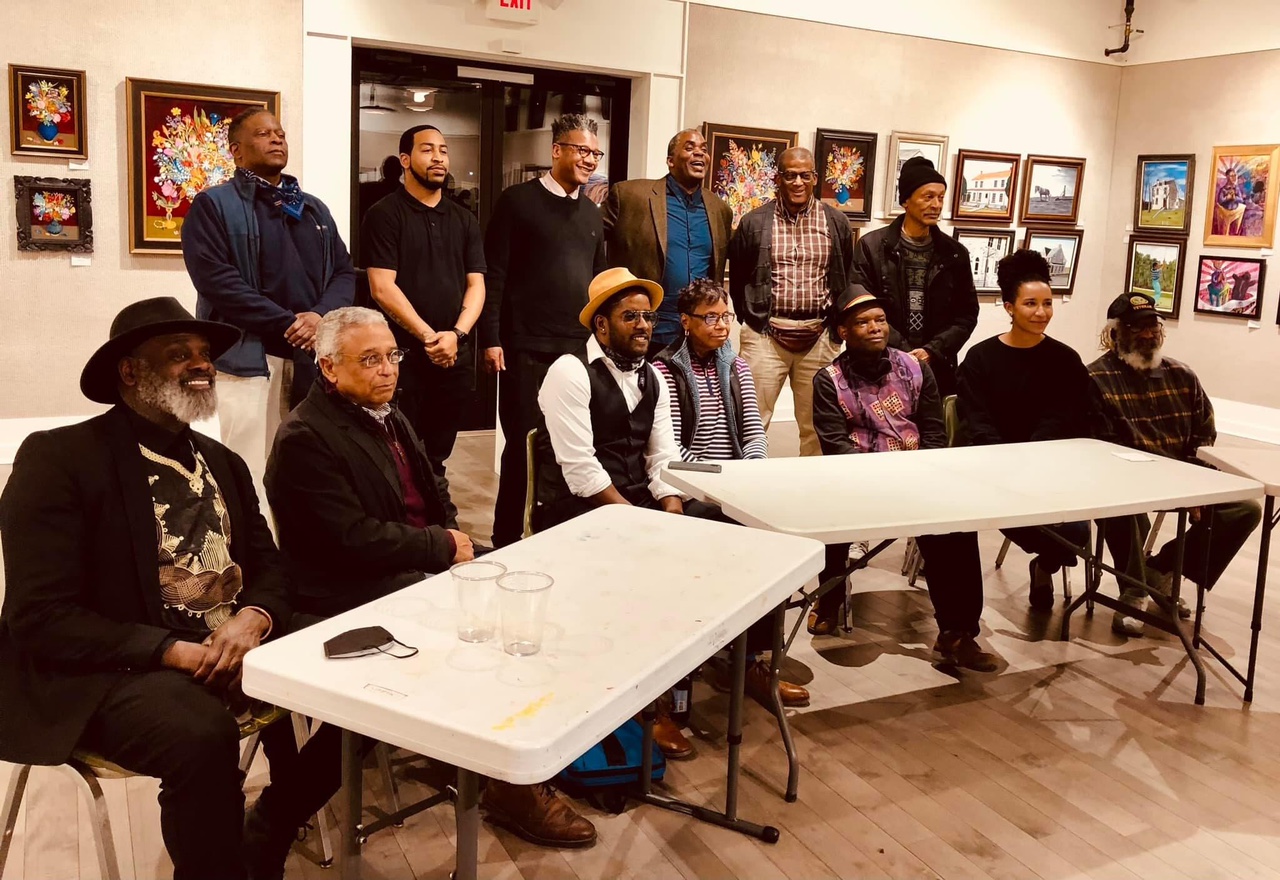 Memory and spirit speak deeply to artist Richard Watson. He goes into his studio, arranges his palette of oils, and paints the most alluring landscapes and portraits from memory. He gives his paintings a rich treatment of pigment. When Watson creates multimedia works, his paintings and drawings share the canvas with ephemera, vintage photography, and found objects. Recurring color ways of aqua, straw, and moss, are tempered by his transference of emotion, as well as his delicate, impressionistic handling of light. A graduate of the Pennsylvania Academy of the Fine Arts, Watson utilizes his art to speak to us about African heritage, racial inequities, social justice, family, natural surroundings and ancestors. I was honored to view some of his work in person, during this groundbreaking show. 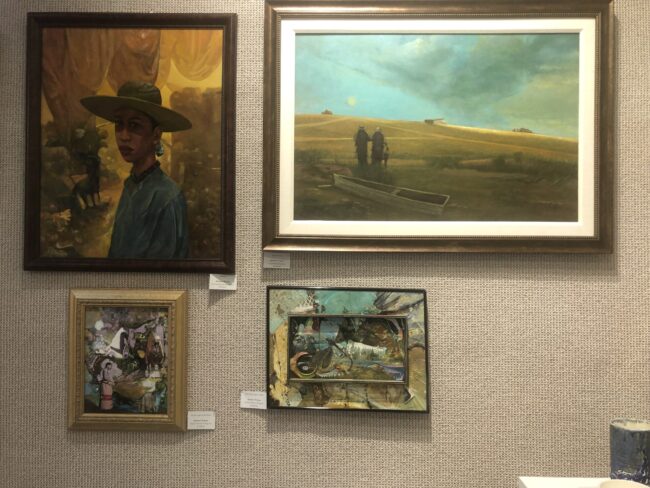 The Chester County Art Association in West Chester, Pennsylvania, hosted its first ever African American art exhibit to commemorate Black History Month, during February and March of 2022. This feat was as welcomed as it was long overdue, given the area’s prevalent Black presence and historical significance that goes back to the antebellum era, and continues up to the present day. For example, West Chester native Bayard Rustin, a member of the LBGTQ community, was a chief organizer of Dr. Martin Luther King, Jr.’s landmark 1963 March on Washington. The celebrated Harlem Renaissance artist Horace Pippin is also from West Chester. He was born there on February 22, 1888, and died there as well, on July 6, 1946. 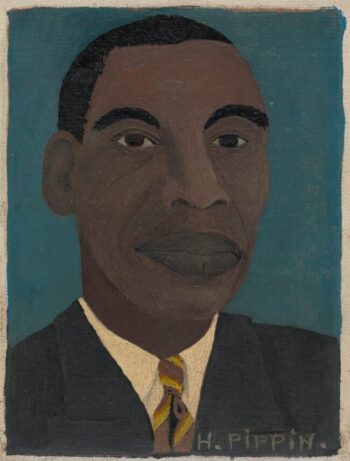 Here is a 1944 self-portrait by Horace Pippin, the celebrated Harlem Renaissance artist who was born in West Chester, PA.

It appears this show was meant to happen, and its creation came about in a very organic way. Special kudos are warranted for the Chester County Art Association Staff and Board of Directors, especially Board President John Baker and Board Member Dane Tilghman, a renowned and prolific artist who served as the principal curator. The idea started out as an impromptu conversation following a Board meeting, and soon after, Tilghman (who also hails from West Chester), had rounded up a powerhouse of his artist friends and colleagues. My lone criticism is that there is only one woman out of the 18 artists. Although the paucity of women in the show is regrettable, their absence does not take away from the brilliance of the brothers. 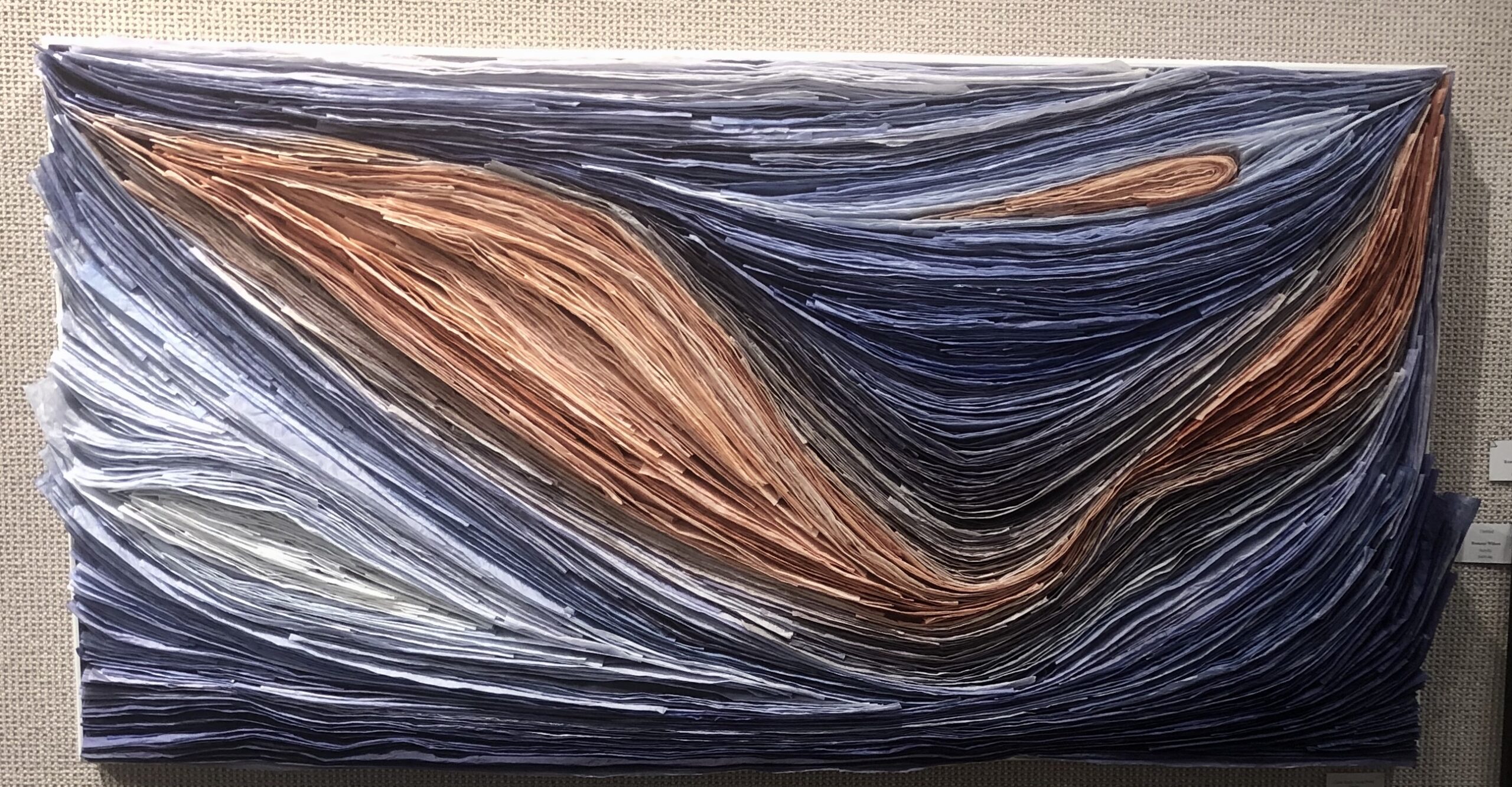 Textile Artist, Ceramicist, and Jewelry Designer Samara Weaver is the only woman represented among the 18 African American artists in the show.

The Exhibit Included A Solo Show & A Group Show 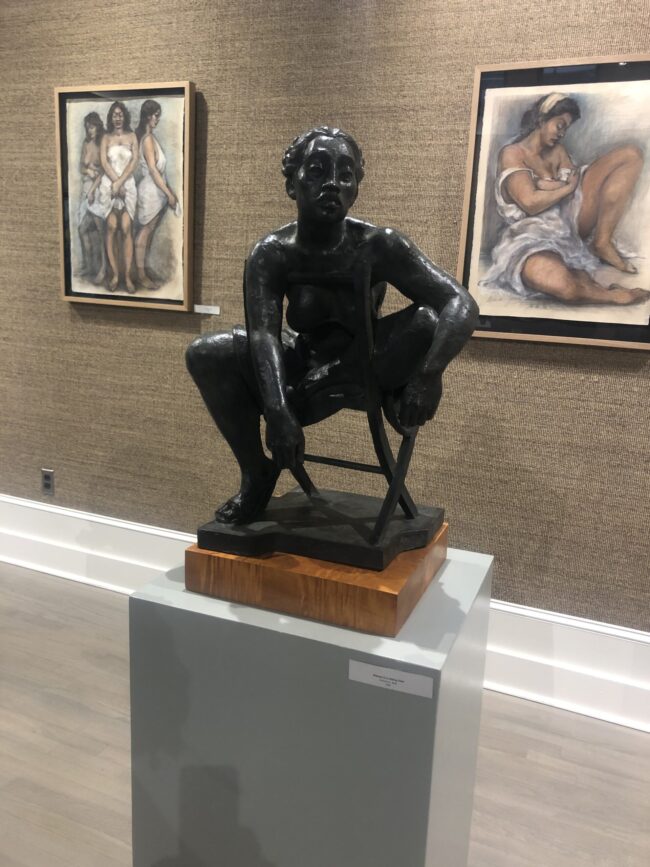 I wonder what the woman sitting in this folding chair is thinking. The statue was included in Richard Blake’s exhibit, “Visions In Bronze, Gypsum and Charcoal.” It is from a series called “Third World Women.”

“Visions In Bronze, Gypsum and Charcoal,” a solo show in the Huston Gallery by Richard Blake, was nothing short of magnificent. The group show, in the Allinson Gallery, “A Black Thread Through Time: A Personal Journey of Black Artists,” was equally impressive. Mediums ranged from sculpture, to fabric, ceramics, acrylic, oils, pen and ink, pencil, multimedia, and photography. There was also watercolor, abstract expressionism, and printmaking. 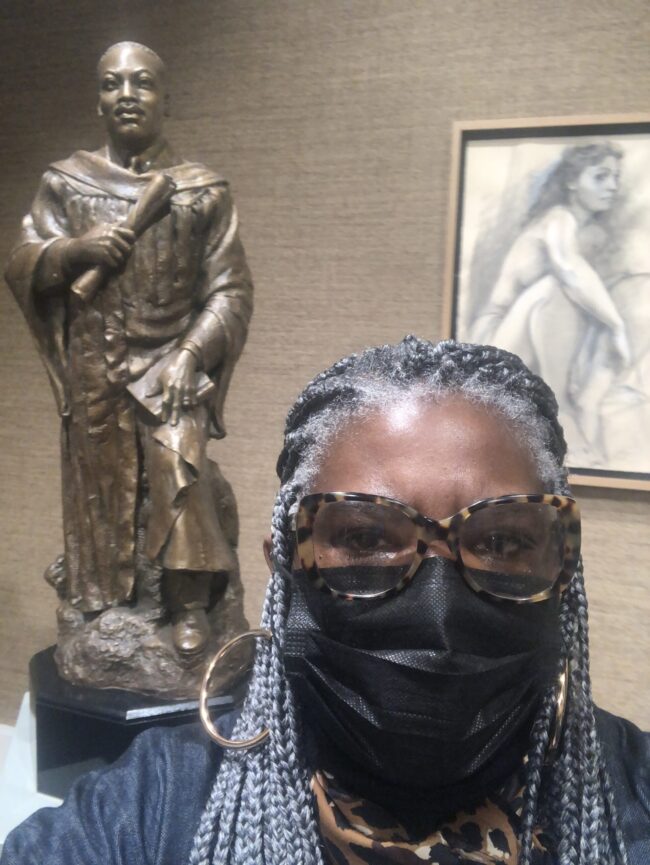 I guess the mask is just a sign of the times! Here I am, viewing Richard Blake’s sculptures and paintings that were on display at the Chester County Art Association, in West Chester, PA, during February and March 2022 for a special African American History Month exhibit.

By dedicating their lives to this work, the respective artists in the show have created a profound legacy that is precious and enduring. They have contributed a wealth of beauty, knowledge, innovation, technique, and skill to the infinitely textured cultural excellence born out of the global African experience throughout the African Diaspora. 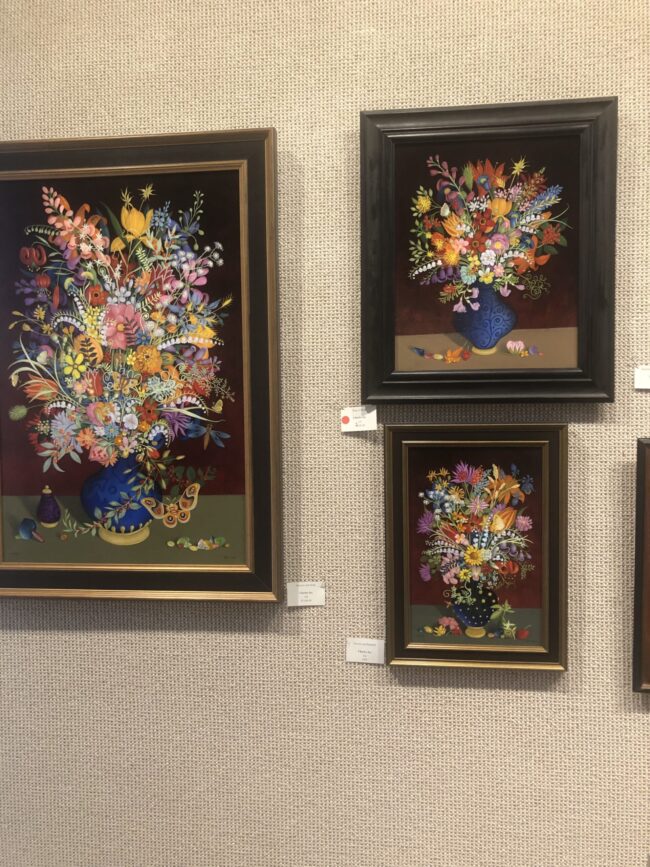 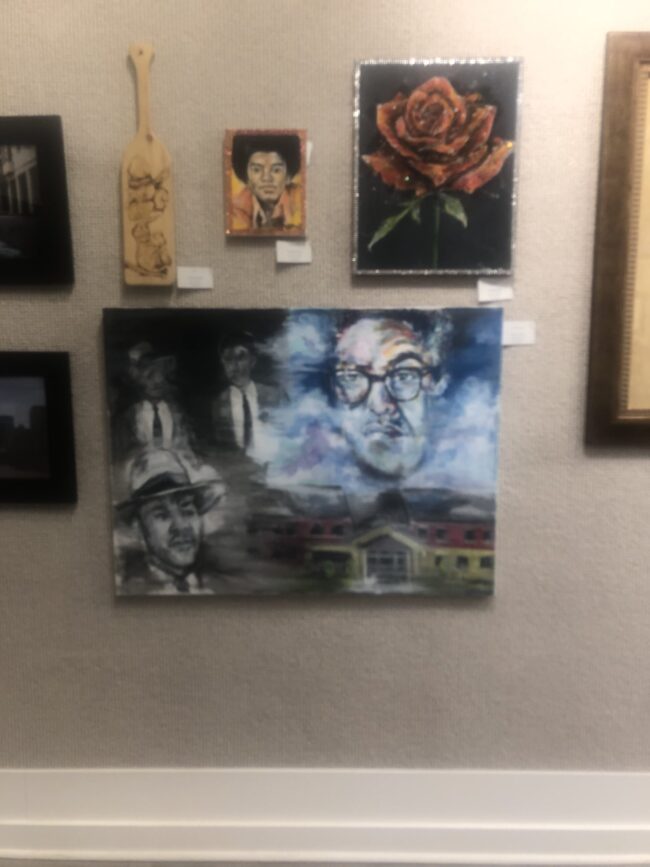 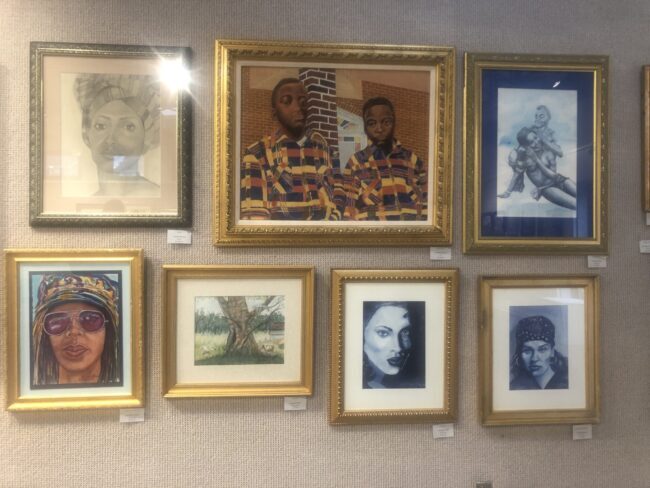 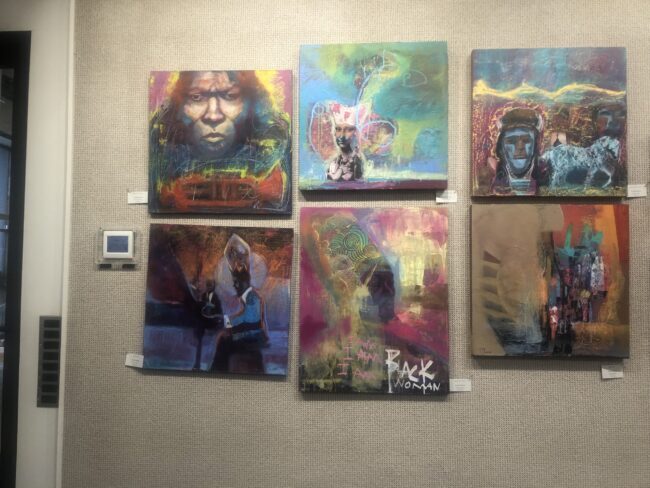 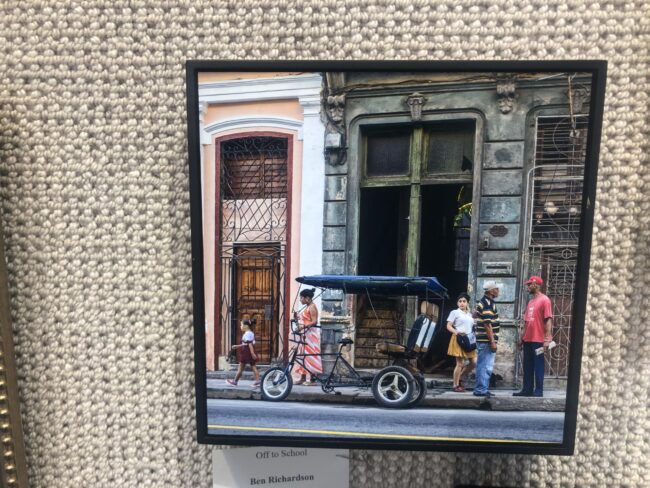 The late photographer and videographer Ben Richardson (1949-2018), was born in Charleston, South Carolina, but spent much of his career living in Exton, PA. During a trip to Cuba, he captured the determination of a little girl going off to school. Mr. Richardson’s wife, JoAnn Richardson, represented him during the public events at the show. 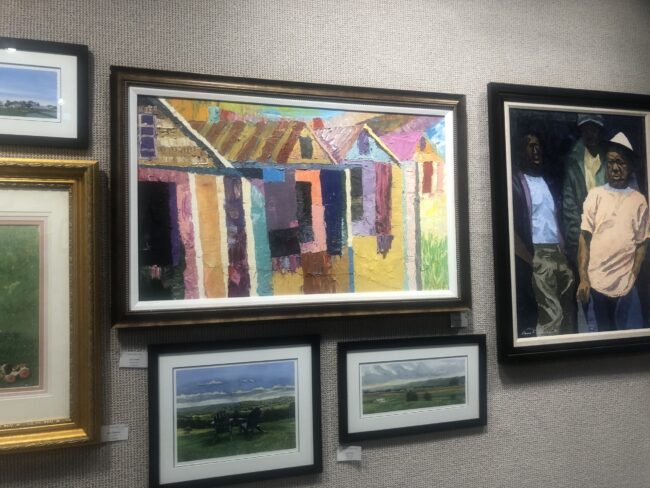 Here are works by Board Member Dane Tilghman and Andy Smith. The landscapes were painted by Andy Smith. Both of these artists have been extremely prolific throughout their careers. Tilghman and Smith have both been known to typically complete more than 300 paintings a year. 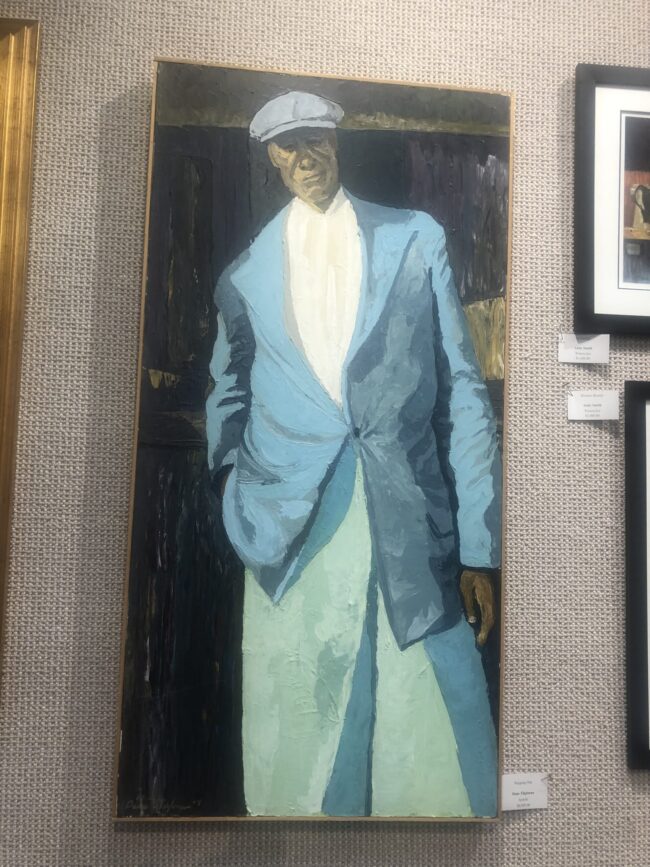 This acrylic painting by Dane Tilghman pays homage and respect to the dignity of Black men, while it simultaneously illustrates his explosive use of color. 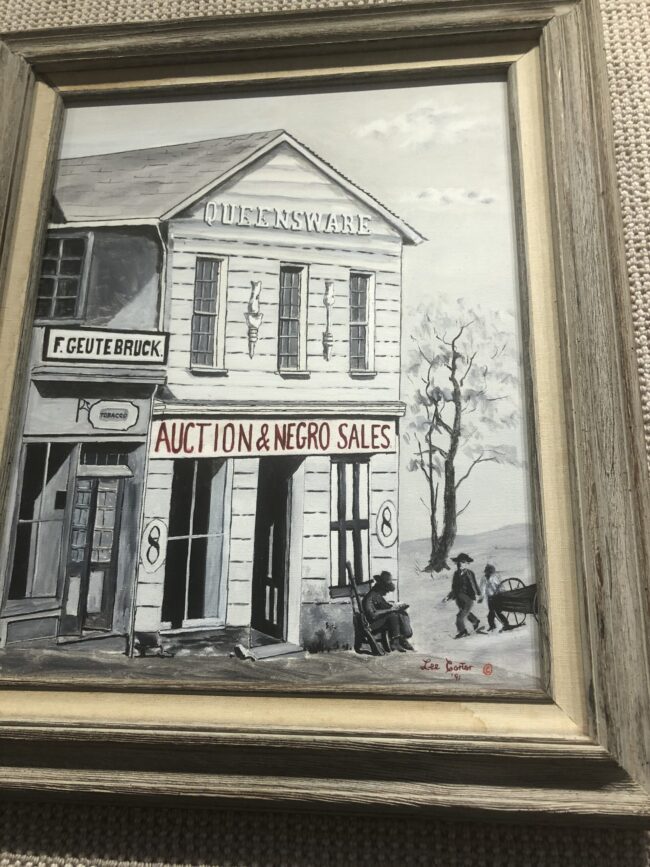 In this thought-provoking scene, the late artist Leroy Carter depicted an aspect of the inhumane practice of slavery. 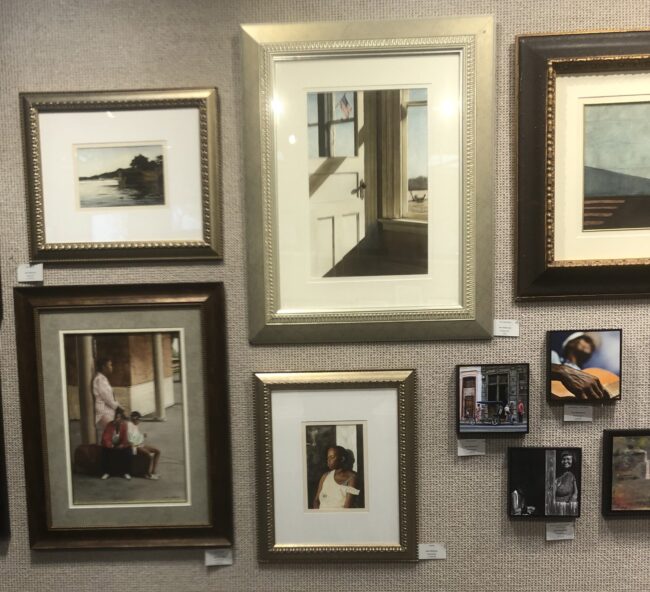 Artwork by Watercolorist Jose Sebourne and Photographer Ben Richardson are featured in the show.

I enjoyed the trek out to West Chester, which is about 35 miles south of where I live in West Philadelphia. Even though I was familiar with some of the artists, prior to the show, I had never even heard of the Chester County Art Association. However by the end of the run, I had visited the galleries five times: three times for public events, and twice with family and friends. I felt stimulated at the opening reception, panel discussion, and closing reception. What an amazing exhibit of Black art. The sense of community and belonging was palpable among the diverse amalgam of guests during each well-attended event.